MEET THE TEAM! WHAT KEEPS OUR MARKETING STARS BUSY 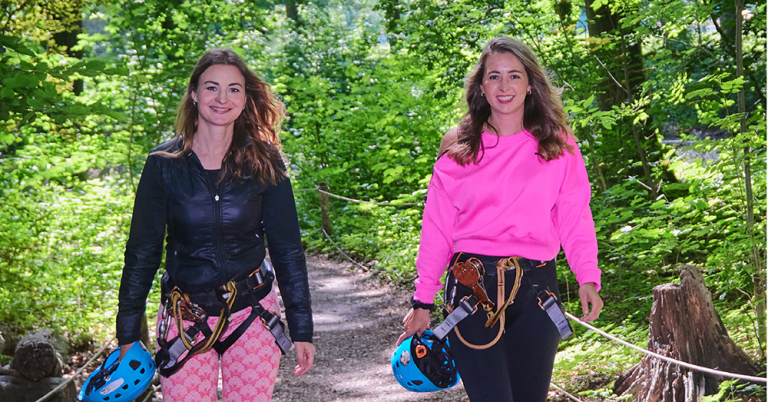 After being temporarily understaffed, our marketing team is once again up to strength. For the moment, at least. They have lofty ambitions, so who knows, perhaps reinforcements will be needed before long. Working back in the office after corona provided inspiration for the summer issue of the ATHOME, ITDS’ in-house magazine. In Amsterdam’s fun forest we recently caught up with Florence Brugmans and Rosanne Bond of ITDS’ marketing team and discussed things like what we can and cannot do after corona. And, of course, their marketing objectives.

What did you miss the most during two years of corona?

Florence:  Probably what most people missed; just being able to go where you want to without having to think about it. Even minor things, like practicing your favourite sport or eating out with friends. We’d lost the ease and freedom to do things, and I’m so glad that it’s now back to normal.

Rosanne: I’d just returned from a trip around the world when corona first broke. From doing everything that you want for three months to just sitting at home on the couch was quite a shock to the system. Even eating out, which I did every week, was suddenly impossible. It was almost like going cold turkey. Everything you’re so accustomed to doing is turned upside down. How about you Florence, were you able to pass the time with hobbies and the like?

Florence: Back then I played a lot of golf. Being an outside pastime in which contact with other people is quite limited, you’d think it wouldn’t have been a problem. But even that was considered hazardous, just in case you touched other people. So that too was off limits for a few months, which I found very frustrating at the time. Then there were the lockdowns, during which you were hardly allowed outside at all. At home we started doing jigsaws. But that didn’t last very long because I am fanatically competitive and I wanted to fit the pieces quicker than my husband. So before long we also abandoned the jigsaw puzzles.

And now that everything’s possible again, what are you most looking forward to?

Rosanne: When it comes to events, everything is now possible at ITDS. And I don’t want to miss anything at all; I want to go to every party and every festival. Just do what we used to do. But, of course, we’ll appreciate it all so much more now. I used to be quite critical, but not any more. And naturally, I also want to make those big trips again. I’d love to go to New Zealand or Japan. But because I can’t choose, I’ll just go to both!

Florence: I’m so pleased that everything is back to how it was. Being able to go and be wherever you want to, without having to take five tests to prove that you don’t have corona. It’s also much better at work, particularly because I’m still relatively new and therefore keen to get to know new people quickly. And that’s so much easier if you are in the office and able to attend social drinks.

What’s your first impression of the organisation and the team?

Rosanne: Corona was still with us when I joined the company. But ITDS was celebrating its 23th anniversary at the time, so that was really nice. I was responsible for the production of our very own ITDS cookbook. This helped me get to know many colleagues relatively quickly, because I had to ask a lot of people for input. I was really made to feel very welcome. At the end of October we also went on a sort of pub-crawl. Together with all colleagues under the age of 30, we ended up in a bar in Amsterdam, where we did some karaoke and enjoyed a few drinks. It was really great fun.

Florence: I couldn’t agree more about being made to feel very welcome. Everyone I’ve talked to here so far say they feel a great vibe. It’s just so positive. The people who work here are intelligent and raring to go, which I find to be a very stimulating environment to work in. It helps to bring out the best in you. I haven’t met and spoken to everybody here yet, so hopefully that will happen during the coming months.

What are your marketing objectives for the coming year?

Rosanne: We really want to grow as a marketing organisation. We are already working on some great projects and collaborations. And we launched our new website in April, which we also want to build on. We’re going full speed ahead.

Florence: We aim to get the three facets that we focus on, external, internal, and labour-market communication, completely on point. Furthermore, we also want people in the organisation to be aware of what we can do for them and that, as a team, we can again set a certain high standard. There is a rebranding in the pipeline too, for which, of course, it is important to also include the employees.

And what are your thoughts on the rebranding?

Rosanne: ITDS did something similar a few years ago and I think it’s a good time to do it again. It helps, of course, that we already have a good basis, but we can always improve it. What’s more, a lot of colleagues are involved, which is a good thing because we really need the input of ITDS employees themselves.

Florence: Yes, definitely! A lot has happened these past few years, in the company as well as in the world. As a brand and a company it’s imperative that you connect with all this. Not only do you have to appeal to the new generation on the labour market, but existing relationships also make new demands and they too have to be developed. In a nutshell, you have to stay with, or ahead, of the curve – particularly if you want to be a leader. Revitalising our brand, our vision and our objectives, they are all part of the deal.